Photographic Find of the Century Depicts Trench Life in WW1

Although it meant disobeying direct orders (and a court martial if he was discovered), Lance Corporal George Hackney obviously felt a duty to document The Great War from a soldierâs perspective. Now, to commemorate the centenary of the First World War, his incredible photographs are being displayed in public for the first time.

The astounding collection, which includes candid photographs taken in the British trenches – and at least one amazing shot of a German surrender in 1916, was compiled between 1915, when Hackney was first sent to the front lines, and 1918, when the brutal conflict finally ended, and the photographer returned home.

Before he was called up, Hackney was a keen amateur photographer, and it shows. His pictures demonstrate a very accomplished sense of composition, but never feel forced or especially posed for (as some photography from the era can). In fact, the images are easily among the most intimate and credible pictures that exist from the conflict.

Among the most remarkable shots is a poignant image of a lone soldier writing a letter home, as well as another showing a group of soldiers (in full uniform) casually napping on the deck of the ship that would eventually deliver them to the front lines.

At the time these photographs were taken, no unofficial photography was allowed on the front lines. However, using a portable folding camera about the size of a modern smart phone, the Northern Irishman was able to document the war effort discreetly and respectfully.

Hackney then gave the photographs to his own family upon his return. In addition, many of his pictures were given as gifts to the families of the men photographed, sometimes offering grieving loved ones a chance to see their missing husband, brother or son, one final time.

To cite one such example, Hackneyâs Sergeant, James Scott, was killed at the Battle of Messines in May 1917. After Lance Corporal Hackney returned home, he presented Scottâs family with three pictures of him, including a striking depiction of the officer looking proud and dashing on horseback.

The Sergeantâs descendant, Mark Scott, was instrumental in uncovering the stories behind these wonderful, and often profound, images…

Hackneyâs pictures also provide excellent accompaniment to the war records of the men in question, rendering them as much more than simply names and numbers, or even as symbols of pure courage and sacrifice. Hackneyâs photographs present these remarkable men to a new generation as simple Human beings fighting through an incredibly difficult time to be alive.

A photograph taken at County Antrim, which depicts Hackneyâs friend John Ewing writing a diary entry (or possibly a letter home), adds a Human element to the historical facts that Ewing was eventually promoted to Sergeant and subsequently won the Military Medal for bravery in the field…

Stories like this abound in Hackneyâs work, which ably presents the war in a far more evocative way than the official press photographs and propaganda of the time could ever have hoped to.

When George Hackney passed away in 1977, his family donated the pictures to the Ulster Museum, where they stayed in the Museumâs archives for over 30 years. These unique, powerful documents were, in turn presented to TV Director Brian Henry Martin by museum curator Dr. Vivienne Pollock, in 2012. Martin was shown the images alongside a collection of Hackneyâs personal diaries and was captivated by them.

In addition, Hackneyâs work is soon to be the subject of a major exhibition at the Ulster Museum.

Mr. Martin is now bringing 300 of Hackneyâs images to the BBC for future use, although it is estimated that there are around 200 more that are undiscovered at the time of writing.

Amanda Moreno of the Museums of The Royal Irish Regiment, told Yahoo! News that, âAs a collection of photographs of the First World War, they are totally exceptional.â

Interviewed for the film, Franky Bostyn, Chief of The Belgian Ministry of Defense said, “I think you made the photographical World War One discovery of the century.” 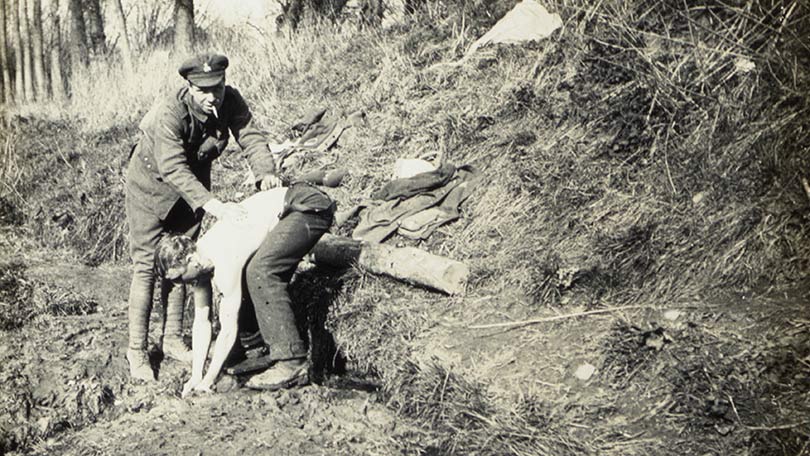 100 years on, George Hackneyâs unique, vivid and (above all) brave photography presents us with a deeply Human portrait of life in the trenches of The Great War.